La Gallina Caponata (Caponata, the Chicken) is a seven-foot tall, multi-colored (largely reddish-pink) bird from the Spanish version of Sesame Street. She appeared on Barrio Sésamo from 1979 to 1980. She is the Spanish equivalent of Big Bird.

Caponata is supposed to be a hen, although any similarity to a hen might be a coincidence.

Caponata is quite similar to Big Bird in personality: A four (or six) year-old helping children to learn and to feel okay about not knowing everything. She is a contrast with wise snail Perezgil.

Caponata also interacts with human characters, being the main Muppet in the scenes filmed in Spain. She was friends with the likes of Adela, Petri and Julián, who seemed not to care about Caponata being a bird. 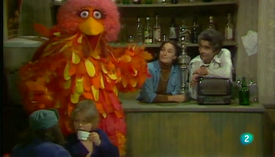 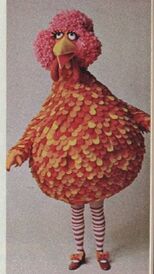 Caponata in full body
Add a photo to this gallery

The word caponata refers to a little-known Italian dish, similar to Greek moussaka.

The Spanish audience was initially confused by Big Bird's appearances on video releases and movies such as Follow That Bird; Big Bird was confused with Caponata although his name had been translated as Paco Pico (Fred Beak, but notice the alliteration).

This confusion has been compounded more recently. In Juega Conmigo, Sésamo, the dubbed version of Play with Me Sesame which debuted in Spain in 2006, Big Bird is called Caponata, not Paco Pico. It's unclear whether this was an oversight or an homage to Emma Cohen's character.