Carol Kane (b. 1952) is a comedic actress whose extensive credits include a recurring role on the television series Taxi as Simka, wife of Latka (Andy Kaufman).

Kane made a cameo appearance in The Muppet Movie as a barmaid at the El Sleezo Cafe. When Kermit says the word "myth," she appears, saying "Yeth?"

Archive footage of her Sesame appearance was included in the 1994 special Stars and Street Forever. 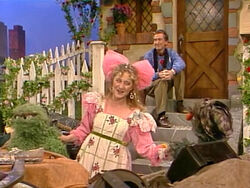 Kane as Nina the Nice, the only nice person in Grouchytown.

Wikipedia has an article related to:
Carol Kane
Community content is available under CC-BY-SA unless otherwise noted.
Advertisement