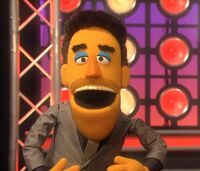 Daly made a cameo appearance as himself in It's a Very Merry Muppet Christmas Movie. He was caricatured in a Sesame Street spoof of The Voice for season 43. Joey Mazzarino's 2013 Daytime Emmy Awards nomination character list included the Daly puppet, listed as "AM Carson Daly".

Wikipedia has an article related to:
Carson Daly
Retrieved from "https://muppet.fandom.com/wiki/Carson_Daly?oldid=700405"
Community content is available under CC-BY-SA unless otherwise noted.