Central Park is one of the most famous parks in New York City. The park has been featured in a number of Henson productions, most notably The Muppets Take Manhattan.

It was also shown in The Producers, which featured animatronic pigeons by Jim Henson's Creature Shop.

On Sesame Street, Central Park has been used as a filming location for some of the opening theme song footage, for Sesame Street Jam: A Musical Celebration, as well as for many other instances of individual segments. Earlier on in the show, Belvedere Castle in Central Park was used in establishing shots for Count von Count's castle. Other notable uses of the park on Sesame Street include a segment with the adults riding bicycles (First: Episode 1186), an insert where David roller skates, and an insert where Barkley follows Mr. Snuffleupagus at Central Park. In the special, Big Bird's Birthday or Let Me Eat Cake, Big Bird and the gang head to Central Park's Wollman Memorial Rink for his skating party.

A bench, dedicated to Jim Henson, can be found on the south end of Central Park. The bench just to the right of Jim's is dedicated to Jon Stone.

The north end of the park is protected by Engine Company 58/Ladder 26, who were featured in episode 3981, when Hooper's Store burned.

In June 1983, the Muppets appeared at an event with Mayor Ed Koch at the Naumburg Bandshell in the south end of the park. Photos from the event are featured in the book New York Comes Back: The Mayoralty of Edward I. Koch. 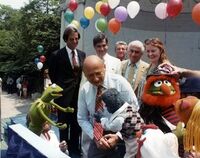 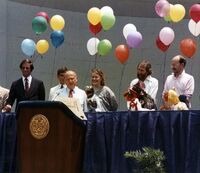 Wikipedia has an article related to:
Central Park
Community content is available under CC-BY-SA unless otherwise noted.
Advertisement