Chamki is an adventurous and inquisitive schoolgirl, anxious to learn more about the world and other cultures. She enjoys learning words from other languages, and delights in tongue twisters. She often pretends to be "Chamki Detective" and solves mysteries on Galli. She also knows karate and plays the guitar.

She appeared in the 2013 Sesame Street Live show Make a New Friend, where she was voiced by Anisha Nagarajan. In 2015, Sesame Workshop and POGO launched an animated series, Chamki ki Duniya (Chamki's World).

In 2019, Chamki featured in her own YouTube series called "Hello Chamki", launched on the Galli Galli Sim Sim YouTube channel on March 8th. 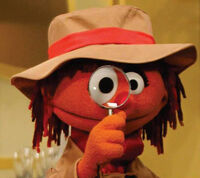 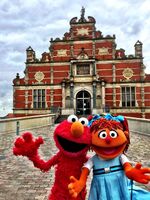 Chamki and Grover in Make a New Friend

Chamki in Episode 4815 of Sesame Street
Add a photo to this gallery
Retrieved from "https://muppet.fandom.com/wiki/Chamki?oldid=1328038"
Community content is available under CC-BY-SA unless otherwise noted.