The Prince Charles, Prince of Wales (b. 1948), full name Charles Philip Arthur George, is the oldest child of Queen Elizabeth II of the United Kingdom and Prince Philip, Duke of Edinburgh, making him heir apparent to the sixteen thrones of Commonwealth realm countries.

After the 1977 Royal Variety Performance, Charles was hugged by Muppet monster Mean Mama. That year, David Lazer invited Charles "or his representative" to the ATV Studios to watch a taping, and consider appearing as a guest on the program, saying he understood "if his schedule —or protocol —prevents him." Charles would have received full script approval.[1] Kermit himself also pitched an appearance.[2]

In 1986, he and Diana attended the Labyrinth Royal Command Premiere.

Kermit the Frog appeared in a 2009 promotional video for the Prince's Rainforests Project, a 2009 online campaign that advocates for an end to rainforest destruction and conservation work in the area.

To celebrate the prince's 50th birthday, Miss Piggy appeared on stage at The Prince's Trust Comedy Gala while Kermit sent his well wishes via pre-recorded video. 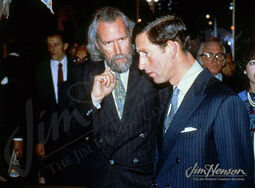 Prince Charles with Jim Henson at the opening of The World of Jim Henson: Muppets Monsters & Magic at London's MOMI in 1988. 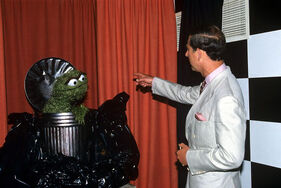 Prince Charles with Oscar the Grouch in 1994.
Add a photo to this gallery

Wikipedia has an article related to:
Charles, Prince of Wales
Retrieved from "https://muppet.fandom.com/wiki/Charles,_Prince_of_Wales?oldid=1318731"
Community content is available under CC-BY-SA unless otherwise noted.