Karin "Charlie" Kaiser is a trained German puppet builder, writer, as well as a puppeteer who has performed on Sesamstrasse since 1993. Two years prior, she met Kermit Love and Marita Stolze, who connected her to the Studio Hamburg puppet productions Hallo Spencer and shortly after, Sesamstrasse.

On the Sesamstrasse spin-off Eine Möhre für Zwei, Kaiser has taken on further side characters such as a pig, and an upset chicken, eager to try on a bra at a department store; a memorable scene that was incorporated into the show's opening theme. 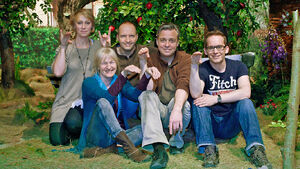 Kaiser (front) with most of her fellow puppeteers on Eine Möhre für Zwei in March, 2011 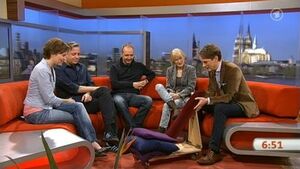 Kaiser with Morar-Haffke and Paas on Morgenmagazin in October, 2011
Add a photo to this gallery

Retrieved from "https://muppet.fandom.com/wiki/Charlie_Kaiser?oldid=1160535"
Community content is available under CC-BY-SA unless otherwise noted.