Chaz the Chameleon appeared on The Animal Show in episode 105. In the episode, he tells Stinky the Skunk and Jake the Polar Bear about chameleons and how their tongues make good ejection to eat bugs and insects. He even sings "The Bug Song."

The puppet was used during Mopatop's introduction to the Mopatop's Shop episode "Something Special". The Chameleon wants to learn to hum, because his best friend is a hummingbird. In this appearance, the Chameleon was performed by Brian Herring. 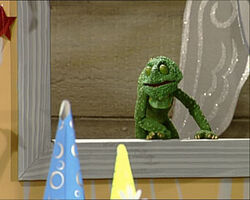 Appearance on Mopatop's Shop
Add a photo to this gallery
Retrieved from "https://muppet.fandom.com/wiki/Chaz_the_Chameleon?oldid=1082229"
Community content is available under CC-BY-SA unless otherwise noted.