Chema, sometimes known as Chema el panadero (Chema the baker), is a character from Barrio Sésamo, the Spanish co-production of Sesame Street.

Chema is an adult human who appeared in the series' second period, from 1983 to 1987. He interacted with full-bodied Muppets Espinete and Don Pimpón.

A blond man who owns a bakery on the Barrio, Chema always wears a white T-shirt, white trousers and a white apron. The apron always shows flour stains, even when he is opening the bakery in the morning, supposedly coming from home. Chema even has his own solo songs, including "Panadero Soy" ("I Am a Baker").

Juan Sánchez has appeared as Chema in live productions of Barrio Sésamo since 1987, alongside actress Chelo Vivares as Espinete and José Riesgo as Julián.

Chema is an abbreviation for the Spanish name José María (Joseph Mary), a male name 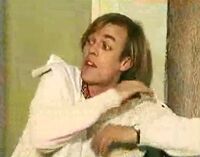 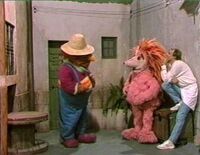 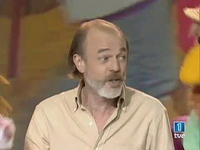 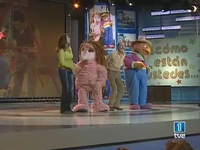 Ana, Chema, Espinete, Don Pimpon 2007
Add a photo to this gallery
Retrieved from "https://muppet.fandom.com/wiki/Chema?oldid=1134738"
Community content is available under CC-BY-SA unless otherwise noted.