The Chicago Cubs are an American professional baseball team based in Chicago, Illinois. Members of Major League Baseball's National League, the team was named officially in 1902, after being known as the Colts, Orphans, and White Stockings. One of the two remaining charter members of the National League, the team plays at Wrigley Field and its fans are known as Cubbies.

On April 26, 2002, Bear from Bear in the Big Blue House appeared at a game against the Los Angeles Dodgers at Wrigley Field. His appearance was to promote the children's charity "Voices for Illinois Children," and to highlight Child Abuse Prevention Month.

On June 27, 2019, during the Sesame Street Road Trip, Cookie Monster appeared as guest conductor for "Take Me Out to the Ball Game" at a home game against the Atlanta Braves. At the top of the seventh-inning stretch, Cookie took to the microphone to proclaim "C is for 'Cubbies'". After the song, in reference to Cubs announcer Harry Caray's saying "Let's get some runs!", Cookie said "Let's get some cookies! ...and some runs too!" The monster was also photographed with a special jersey, numbered 50 for Sesame Street’s 50th anniversary. (YouTube) 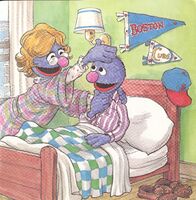 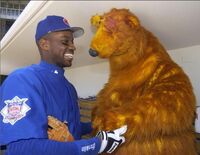 Fred McGriff
Add a photo to this gallery

Wikipedia has an article related to:
Chicago Cubs
Retrieved from "https://muppet.fandom.com/wiki/Chicago_Cubs?oldid=1256346"
Community content is available under CC-BY-SA unless otherwise noted.