Children's Songs and Stories (with the Muppets) was released by Playhouse Video in 1985, as part of a series of compilations featuring songs and sketches from The Muppet Show.

In this one hour compilation, Scooter presents his scrapbook of songs and scenes from The Muppet Show for children. He tries to introduce his "personal favorite" song, but is continually interrupted by various characters (all performed by Jim Henson). 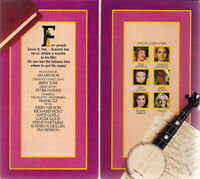