The pilot sold The Muppets as a series where Chip works in IT for Up Late with Miss Piggy. In the series, Chip struggles with social boundaries, having read a number of e-mail exchanges between Gonzo and his online match Debbie, for example ("Bear Left Then Bear Write"). "Going, Going, Gonzo" establishes that his life-long dream is to spread joy by tap-dancing across the world. In "Single All the Way", he describes his experience with synesthesia to Sam, explaining that he discovered he could sometimes see numbers as colors since he was yellow and a half years old. In "A Tail of Two Piggies", it's revealed that he was born with a tail. Having been removed, he keeps it on his necklace so he can be reincarnated.

Chip appears in the episodes "Sleep Mode" and "The I.T. Factor" on Muppets Now, but his face can be glimpsed before, starting with the premiere episode, as an app icon on Scooter's shared computer screen. 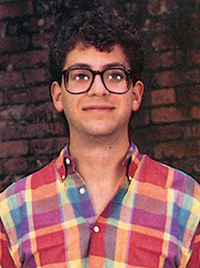