Chip is a nerdy technician who worked for Gorilla Television, the pirate broadcasting operation on The Jim Henson Hour. The Gorilla crew despised popular television entertainment, including that of the Muppets, so they tried to seize control of the show and broadcast their own material instead. Chip's Gorilla Television cohorts were Zondra and Ubu.

Chip has an egg-shaped head, a protruding set of upper teeth and large eyes with shutter-style blinking pupils. He wears red-framed spectacles and a plaid jacket, often with an "ALF for President" button on the lapel, referencing NBC's other prime-time puppet show of the time.

In addition to The Jim Henson Hour, Chip appeared in the background in Muppets Tonight, Muppets from Space, It's a Very Merry Muppet Christmas Movie, and The Muppets' Wizard of Oz. After a ten year absence, he appeared in a presentation pilot for ABC (played by Dave Goelz). The pilot sold The Muppets as a series where he works in IT for Up Late with Miss Piggy.

The original sketch for Chip (pictured) came from Michael Frith. He is a caricature of Muppet writer (and Frith colleague) Bill Prady, a nod to Prady's earlier career as a computer programmer.[1]

In the audio commentary on the DVD release of Muppets from Space, Gonzo and Rizzo refer to him as "Lester Zidwango". 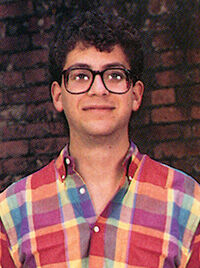 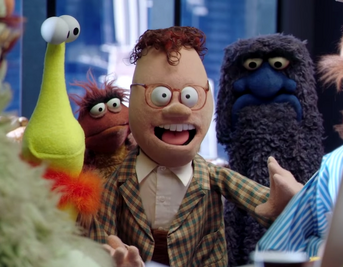 Chip among his fellow obscure Muppets in The Muppets pilot presentation 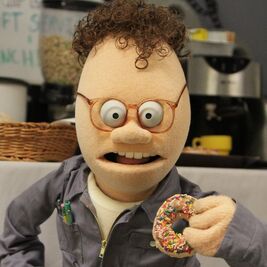 Chip rebuilt for The Muppets
Add a photo to this gallery