Chloë Grace Moretz (b. 1997) is an American film actress who has appeared in such films as The Amityville Horror (with Ryan Reynolds), (500) Days of Summer (with Joseph Gordon-Levitt and Zooey Deschanel), Diary of a Wimpy Kid, Kick-Ass, Hugo (with Ben Kingsley and Jude Law), Dark Shadows (with Johnny Depp, Michelle Pfeiffer and Helena Bonham Carter), and the 2013 adaptation of Stephen King's Carrie.

Moretz appears in a small cameo as a Russian newspaper girl in Muppets Most Wanted. 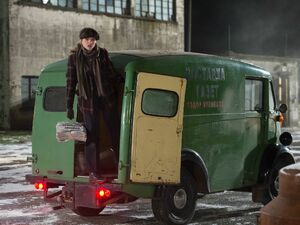 Add a photo to this gallery
Wikipedia has an article related to:
Chloë Grace Moretz
Retrieved from "https://muppet.fandom.com/wiki/Chlo%C3%AB_Grace_Moretz?oldid=1069945"
Community content is available under CC-BY-SA unless otherwise noted.