Christian Louboutin (b. 1964) is a French footwear designer best known for his incorporating shiny, red-lacquered soles into his designs that have become his signature. Among his many clients are Diane von Fürstenberg, Sarah Jessica Parker and Madonna.

Louboutin designed a custom pair of shoes for Miss Piggy for The Muppets. Piggy was seen in the custom designed shoes for many of the promotional appearances of for the film, including a November 2011 appearance on Late Night with Jimmy Fallon and The Muppets world premiere.

The shoes were later on display at the El Capitan Theatre, along with many other of Miss Piggy's costumes from the film, including her original Zac Posen dress, as well as props from Kermit's office and Miss Piggy's Dressing Room.

She wore Louboutin on the red carpet of the 2012 Academy Awards. 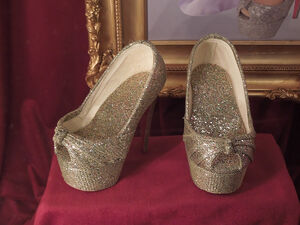 Louboutin's shoes on display at the El Capitan Theatre.
Add a photo to this gallery

Wikipedia has an article related to:
Christian Louboutin
Retrieved from "https://muppet.fandom.com/wiki/Christian_Louboutin?oldid=1069985"
Community content is available under CC-BY-SA unless otherwise noted.