Christina Applegate (b. 1971) is an American actress best known for playing Kelly Bundy on the FOX sitcom Married... with Children.

Applegate appeared in the 40th season of Sesame Street, explaining the word "booth" with Elmo in a Word of the Day segment, and in the first DVD release of the new Shalom Sesame, "Welcome to Israel" (2010).

In 2015, she appeared in The Muppets episode "Bear Left Then Bear Write" as a guest on Up Late with Miss Piggy.

She starred in the ABC sitcom Samantha Who?, and on Broadway in Sweet Charity. Her film appearances include Tim Burton's Mars Attacks! and Don't Tell Mom the Babysitter's Dead. Other television credits include King of the Hill, Friends, and Still the Beaver. 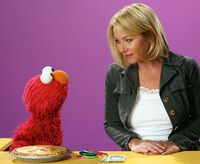 Applegate with Elmo on Sesame Street 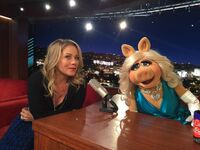 Applegate with Miss Piggy on The Muppets 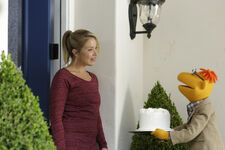 Wikipedia has an article related to:
Christina Applegate
Retrieved from "https://muppet.fandom.com/wiki/Christina_Applegate?oldid=1151305"
Community content is available under CC-BY-SA unless otherwise noted.