Chutes and Ladders is a classic children's board game. Two Sesame Street versions of the game have been released by Hasbro, under the Milton Bradley label in 2004 and the Hasbro label in 2011. Outside the US, the game is known as Snakes and Ladders, and there has been a Sesame version of that game produced as well.

The game takes the premise of the classic Chutes and Ladders game and alters elements to fit the educational aims of Sesame Street. When a player's piece lands on a slide, the square illustrates that the step backward is a consequence to some event. So, if the top of the slide depicts Telly Monster sitting on Baby Bear's beach ball, the illustration at the bottom of the slide shows that the beach ball sprang a leak. Likewise, advancement up a ladder is justified with some good deed such as sharing or helping others. So, if the bottom of the ladder depicts Super Grover rescuing Elmo's doll, the illustration at the top of the ladder shows that Elmo thanked Grover from retrieving his doll. 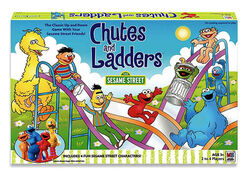 The 2011 version takes a similar educational tack in the board design. In this version, the players' pieces are Elmo, Cookie Monster, Ernie and Abby Cadabby. 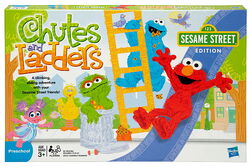 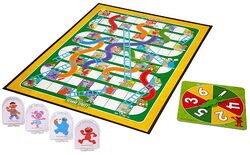 Add a photo to this gallery
Retrieved from "https://muppet.fandom.com/wiki/Chutes_and_Ladders?oldid=1151477"
Community content is available under CC-BY-SA unless otherwise noted.