The Circus is a group of performers, including but not limited to acrobats, clowns, animal acts, jugglers, and daredevils who perform in a troupe, often in multiple rings or arenas, and led by a Ringmaster. The Circus dates back to ancient Rome, where it consisted of horse and chariot races, and China where they consisted of primarily acrobatic acts.

The first western circus opened in Philadelphia in 1793, but it was P.T. Barnum who was the pioneer of what audiences are familiar with today. Upon his death and subsequent merger of his circus with that of James Anthony Bailey, a more familiar circus was born, with a large canvas tent, human oddities for a sideshow, and multiple rings housing continuous acts. In 1919, the Barnum and Bailey show merged with the Ringling Brothers show, to form the quintessential American circus, the Ringling Bros. and Barnum & Bailey Circus.

The modern circus is an amalgam other influences as well. Bands of Gypsies often brought with them circus skills and trained animals while traveling Britain, and Antonio Franconi, the founder of the French circus, is often credited as a co-creator of the modern circus. Buffalo Bill's Wild West Show was also a precursor to the circus we are now familiar with.

While often touted as an evening of excitement and fun, not all is always happy with the circus. Clowns were often used as a distraction to the audience when an accident occurred (or an act flopped). Stephen Sondheim's song "Send in the Clowns" is a metaphorical looks at this stage practice. With the advent of more theatrical stages, clowns became pure comic relief, and have even provided a launching pad to a successful career outside the circus, as was the case for Bill Irwin.

Animal cruelty has shrouded the circus for years. With animal acts involving Lions, Tigers, Elephants and more, animal activists have been concerned over their housing and training. This concern became the focus of a Dinosaurs episode titled "Charlene and Her Amazing Humans", where Cavelings are mistreated to perform on cue.

The sideshow also became an integral part of the circus, with "freaks" (such as Tattooed Ladies or gimmicky acts (such as the Flea circus) luring people into spending additional money for the secondary show.

Aside from the Ringling Brothers, Barnum and Bailey Circus, other famous circuses include Cirque du Soleil and The Big Apple Circus, and famous acts have included Emmett Kelly and Gunther Gebel-Williams.

The Muppets have visited the circus on numerous occasions.

Mildred: George, do you like circuses?
George: Oh, I love 'em!
Mildred: Then, you must love Ringling.
George: I don't know. I never ringled! 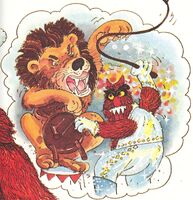 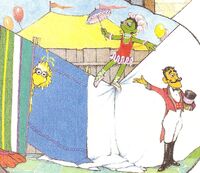 The circus practices in Susan's backyard.
Wikipedia has an article related to:
Circus
Community content is available under CC-BY-SA unless otherwise noted.
Advertisement