The Clam appeared on the Where Do I Belong? game show with a fish and a scuba diver who couldn't figure out where they all belonged. He likes to lie around and be wet and happy, so he naturally belongs in the water. 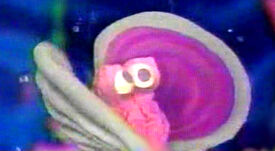 Retrieved from "https://muppet.fandom.com/wiki/Clam?oldid=1222786"
Community content is available under CC-BY-SA unless otherwise noted.