Three full-bodied Muppet Clowns appeared on episode 205 of The Muppet Show, dancing behind guest star Judy Collins as she sang "Send in the Clowns." Each clown has different colored shaggy hair: one blue, one green, and the other red.

The dancing clowns also appeared in episode 512, where they were joined by a small clown puppet dancing on a high wire in "We Don't Cry Out Loud."

"Send in the Clowns"

"Don't Cry Out Loud"
Add a photo to this gallery 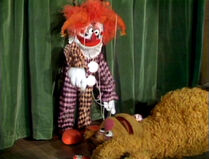 The Fragglettes in "The Clown Concerto" 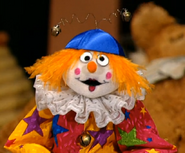 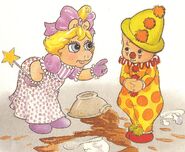 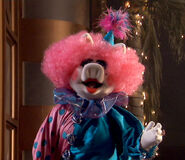 Elmo in Circus the Musical

Wikipedia has an article related to:
Clowns
Retrieved from "https://muppet.fandom.com/wiki/Clowns?oldid=1163698"
Community content is available under CC-BY-SA unless otherwise noted.