Dakota Starblanket Wolfchild, known as "Cody", is the infant son of Buffy and her husband Sheldon. He appeared on Sesame Street beginning in season 8 and continued to appear on occasion as late as season 12.

Buffy announced that she was expecting a baby in a letter to Maria in Episode 1010, and subsequently that he had been born in another letter in Episode 1021. Buffy returned to Sesame Street in Episode 1027 to perform some concerts in the city while Sheldon stayed home in Hawaii with Cody and she stayed with her Sesame Street friends. Several episodes followed in which Big Bird prepared for Cody's arrival, who was finally introduced in Episode 1035.

The presence of Cody was a cause of occasional conflict with Big Bird, who often felt jealous of the baby and the attention he received, as seen in Episode 1037 and 1040. One of Cody's most notable appearances on Sesame Street came in a scene where he was breastfed by his mother, who explained the action to Big Bird.

When Buffy and Cody came to stay in Season 12 (beginning in Episode 1535), Maria's guest room was being used by her cousin Mercedes, so they had to stay in Oscar's trash can for several weeks. They stayed with him until Episode 1564, when they returned home to Hawaii. 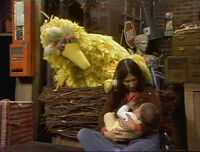 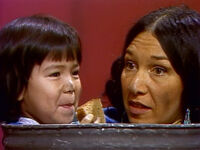 Peeking out of Oscar's trash can in Episode 1553
Community content is available under CC-BY-SA unless otherwise noted.
Advertisement