The Coffee Break Machine is a Muppet routine created for an IBM training film, and used again for sketches in various appearances.

In the original IBM film, a monster (who would eventually evolve into Cookie Monster) wanders upon a talking coffee machine that has been set in "Auto-Descriptive" Mode. As the machine describes its parts, the monster eats them. Once the machine is finished, the voice of the machine from inside the monster tells him that he has activated the anti-vandalism program, which harbors the most powerful explosives known to man. The monster instantly combusts.

The same proto-Cookie Monster performed the sketch on The Ed Sullivan Show in 1967 with a slight variation: in this version, the machine itself is an explosive device.

A shorter remake of the Ed Sullivan Show version was made for an episode of The Muppet Show, with the role of the monster played by Luncheon Counter Monster. In this version, when the monster eats the final piece and is told of a powerful weapon of mass destruction, he has a momentary regretful look that he is about to pay an expensive price for his destructiveness and gluttony, then promptly explodes. Statler and Waldorf then comment that the situation is like family dinners at their house.

Luncheon Counter Monster performed the sketch again in a 1987 Muppet Meeting Film in which he attacks another coffee maker, only to explode yet again.

The original film is shown in the opening sequence of The Muppets: A Celebration of 30 Years. 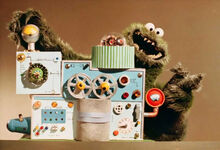 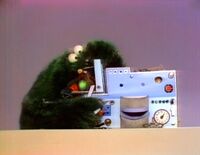 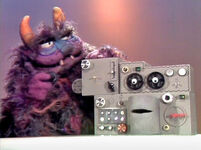 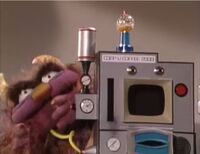