Colleen Barker is the heroine of Dog City, as seen on The Jim Henson Hour. A collie and girlfriend of Ace Yu, her kidnapping spurs Ace into action.

She had a brief cameo in a different costume in The Secrets of the Muppets at the OMD.

On the later puppet/animated spinoff series, Colleen returned, with a slightly modified puppet, same name and performer, as neighbor and off-and-on girlfriend to Eliot Shag in the puppet framing sequences. She was abruptly dropped at the start of the second season, with the explanation that she'd moved out of the apartment building. Though the character was abandoned, Fran Brill continued on the series, playing Colleen's replacement, Terri Springer. The puppet was later reused as the puppet version of Rosie O'Gravy in Episode 210: Sick as a Dog. 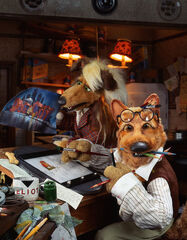