The Comp-U-Coffee 2000 is an automated coffee maker, seen in a 1987 Muppet Meeting Film, "The Coffee Break Machine." The short is a remake of one made for IBM over two decades prior, which was subsequently redone in other productions. Unlike the other versions of the routine, this particular iteration is the only one to give the machine a name.

In the short, Luncheon Counter Monster approaches the machine, which is able to produce coffee (and all its attributes, from the styrofoam cup to the creamer) from within the machine. As the monster gobbles down his coffee, the machine describes all its features that allow for the coffee to be created; the monster eats each piece upon description. Once the entire machine is digested, it warns the monster (from inside his stomach) that he has set off the device's "Anti-Theft and Vandalism Device," which employs the most powerful explosives known to man (blowing the monster to kingdom come).

A few years later, the device was seen in the background of the Muppets' production facility in The Muppets Celebrate Jim Henson. 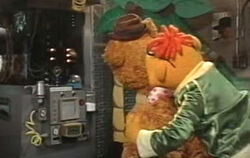 The Muppets Celebrate Jim Henson
Add a photo to this gallery
Retrieved from "https://muppet.fandom.com/wiki/Comp-U-Coffee_2000?oldid=1312867"
Community content is available under CC-BY-SA unless otherwise noted.