Connie the Witch is one of Sesame Street’s witches.

She's pictured several times in the 1980 book The Sesame Street Dictionary, along with other unnamed witches. She's first named in the entry for "stay" where she appears as a green AM, and later features in the definition for "witch" as a lavender AM.

For a 1974 Muppet Miniatures set from Questor themed after "Hansel and Gretel", the green witch is identified as Connie the Witch. 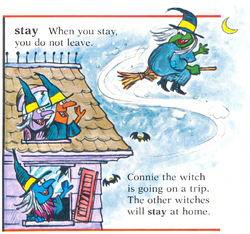 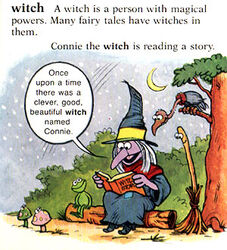 Retrieved from "https://muppet.fandom.com/wiki/Connie_the_Witch?oldid=1232016"
Community content is available under CC-BY-SA unless otherwise noted.