Muppet Wiki
Register
Don't have an account?
Sign In
Advertisement
in: Muppets Most Wanted Characters, Muppet Characters, The Muppets Characters

Constantine is the world's "Number One" criminal and a doppelgänger of Kermit the Frog. He is the main antagonist in the film Muppets Most Wanted, along with his sidekick Dominic Badguy (aka "Number Two"). Constantine sets out to steal the Crown Jewels of England. However, mayhem ensues when he gets entangled with the Muppet troupe on their European tour.

He is almost identical to Kermit aside from a few details. His pupils are shaped like Kermit's, but are slanted in toward each other at a sharper angle. Kermit's signature 11-point collar is duplicated, but Constantine's is notably shorter. The most distinguishable difference is a beauty mark on Constantine's face.

In the film, Constantine, concealed in a black cloak, confronts Kermit and slaps a fake mole to his face, which gets him mistaken for the evil frog and thrown in a Siberian gulag. Constantine disguises himself as Kermit by covering up his mole with green makeup, and his thick Russian accent is passed off by Dominic as Kermit having caught a cold.

When asked whether he would be playing both the role of himself and Constantine, Kermit replied in the negative (although he did imply that nepotism was involved in casting):

"No. We talked about putting me in makeup and having me play both roles, but we decided Constantine needed to be a guy who could do a Russian accent. And, you know, I'm a pretty accomplished actor and all, but besides The Muppet Christmas Carol and Muppet Treasure Island films, I've only really ever played myself. The great thing is, I have like 3,000 relatives back in the swamp, so it was quite easy to find a frog who could play Constantine."[1]

A March 2014 article in The New York Times described the creation of Constantine, speaking to Muppets Most Wanted director James Bobin and Constantine's performer, Matt Vogel:

“Because the other Muppets often think that Constantine is Kermit, it was crucial that he strongly resemble Kermit, with only small differences.

"Initially, we were going to have him be a different color green, a slightly faded-out green color. But we started doing camera tests and it became obvious that he wasn't Kermit." The filmmakers decided on the same color and same materials as Kermit, but Constantine's collar is shorter with wider spikes. And their eyes are different.

"Kermit's eyes are very smiley. Constantine's eyes are more flat and slightly bending in to create a sort of frown." Kermit's head, without a hand in it, has a more smiling natural position. Constantine's mouth falls into a natural grimace. The final difference was the mole. "It's a classic movie trope. Two guys look exactly the same apart from one birthmark or mole. We love working these tropes into Muppet movies, because they play so well." When Constantine switches with Kermit, he uses green makeup to hide the mole.

"I wanted to create a full-fledged character rather than just a goofy impersonation of Kermit," he said by phone. He worked on Constantine's accent with a dialect coach. In working the puppet, Mr. Vogel avoided Kermit's light, airy moves. "We found a way to make him look heavier and more deliberate. He even sits differently than Kermit, more closed off," he said. In operating Constantine's hands, he would either have the fingertips steeple in an evil way or drop the arms and move the puppet from side to side, as if he had shoulders, when he walked. For the face, Mr. Vogel noticed that if he wrinkled Constantine into more of a frown, he made him look menacing.[2]” 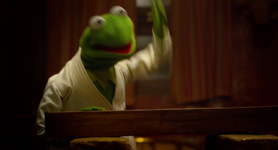 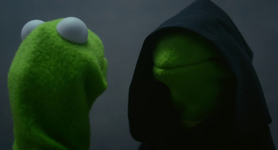 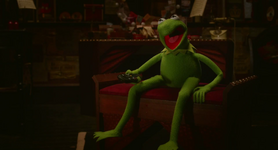 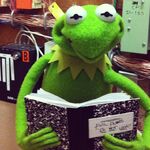 "Constantine loves his alone time and has gotten really into journaling lately. Isn’t that sweet?" The Muppets on Instagram 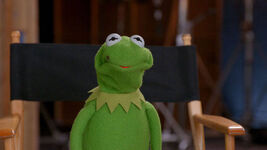 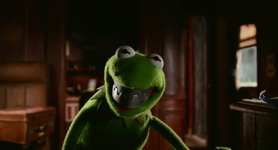 Constantine after he realizes that Fozzie, Animal, and Walter have caught onto him.

Constantine's German language "Wanted" posters across Berlin, while mostly correct, feature some mock-German in the phrase "Evilen Froggen." In order to claim correctness, it would have to depict Constantine as a "Böser Frosch" instead.

On the door of his prison cell