Convincing John is a Fraggle who can convince anyone of anything. He bears more than a passing resemblance to the flashier kind of evangelical priest. His technique for persuasion involves a catchy song (assisted by his backing singers, the Fragglettes) outlining a spuriously awful fate that will befall his listeners if they fail to heed his advice. According to the Fragglettes, the more verses his song has, the more convincing it will be.

Other Fraggles tend to view the persuasive "Mr. John" with awe and, at times, a certain amount of apprehension. It is said that he could convince the stones to change color, convince a Gorg that he was a Doozer, and convince a Doozer to stop working and start dancing.

Convincing John is not above abusing his power -- although Mokey and Red's first meeting with him is not shown, Red leaves it wearing a blindfold ("He told me it was the only way to live") and Mokey is seen wearing plastic cups on her hands.

In "The Secret of Convincing John," it is revealed that, like Wembley, Convincing John is an indecisive "wembler." This, in fact, is the key to his success, as it allows him to see things from all possible angles.

In "The Secret Society of Poobahs," John was the Vanguard of the Poobahs. In this appearance, he has a hard time separating "guilty" from "innocent" ("Doesn't it have something to do with lambs?"). 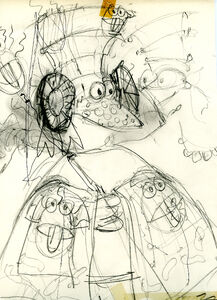 Henson's design for Convincing John dressed as the Grand Poobah

Convincing John is one of the only two recurring Fraggle Rock characters performed by Jim Henson, the other being Cantus the Minstrel.