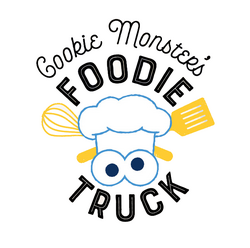 The segments star Cookie Monster and Gonger (from The Furchester Hotel), working in their own food truck and fielding orders from live children (and occasionally others) via video message. To complete their recipe, the monsters drive the truck to a specific location and learn about where certain foods originally come from.

In 2018, a series of Youtube-exclusive editions of the segment were released in partnership with Earth's Best. In these shorts, the monsters produce recipes with the help of celebrity guests.

In promotion for the segment, the Foodie Truck was brought to the Metrograph theater in New York City on November 9, 2017 at a screening for The Magical Wand Chase.

A smaller, two-dimensional version of the truck, playing footage from the "Foodie Truck" segments, is used at malls during the F is for Friends pop-up tour. The Foodie Truck is also featured in the Sesame Street Live show Make Your Magic with in-costume versions of Gonger and Cookie Monster showing the "magic" of baking cookies alongside Elmo, Abby, and Justin the (human) Magician.

In 2019, the Foodie Truck became a fixture, as a functional food service stop, in the Sesame Neighborhood area of Sesame Place. In the same year, it was also added to the "Can You Tell Me How to Get to Sesame Street?" exhibit at the Strong National Museum of Play[2] and Sesame Street at SeaWorld, both as interactive gaming experiences for visitors.

A slightly dilapidated, vine-covered version of the Foodie Truck is seen in the background of "Snack-Side Down" in the show's 2017 viral video spoof of Stranger Things.

The segment was originally conceived by Warrick Brownlow-Pike, performer of Gonger, during the production of The Furchester Hotel. In an interview with Tough Pigs, he detailed:

“When David Rudman was around on the Furchester and Cookie Monster and Gonger got together, everybody found it hilarious. And as we got to the end of the run of The Furchester, I decided we needed to keep the duo going. So I started to develop an idea for them, I thought maybe they could be delivery people who deliver food from The Furchester Hotel kitchen. That kind of moved on to the idea of Cookie Monster and Gonger having their own food truck, and they can serve food from the truck. I developed this idea with Carol-Lynn Parente, who was the Producer of ‘The Furchester Hotel’, and we wrote a 5-minute script. There was a food truck outside the studios where we were shooting in Manchester that was open at lunch time. So I asked the owner if I could use his truck for an hour and gave him some money and he gave me his van for an hour, and we shot a pilot with myself and David Rudman on iPhones, and that’s what helped us sell the show. This idea then merged into what you see in Season 48 of Sesame Street which is ‘Cookie Monster’s Foodie Truck’.[3]”

The segment was originally pitched as a miniseries for CBeebies, which passed on it because they already had a food truck show in production.[4]

The segments are shot from three different perspectives: exterior shots using the whole truck on the street set, a raised set of the inside of the truck,[3] and the on-location footage of both the Foodie Truck's travels and the various food locations.

Elements of the segment were directed by Alan Muraoka[5] and Marilyn Agrelo.[6] The foodie truck was designed by David Gallo and built by Scenic Art Studios.[7]

The segments were featured in the third season of the Latin American-Spanish production, Sésamo. In 2018, the segments aired as their own standalone series on the UK channel Tiny Pop.[8] 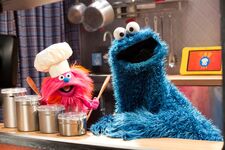 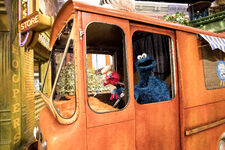 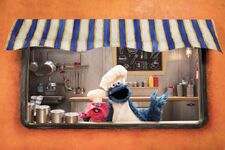 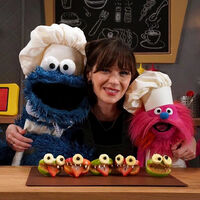 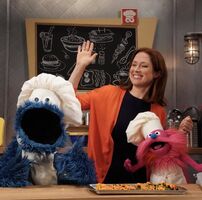 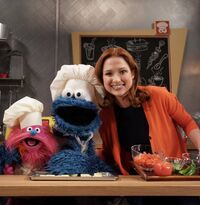 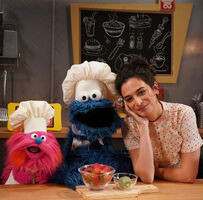 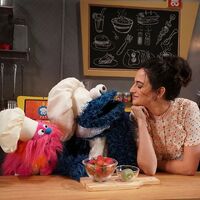