This book is partially presented in comic book style, with some of the dialogue in word balloons.

The audio edition features Fran Brill as the witch, and Caroll Spinney as the Cookie Tree. 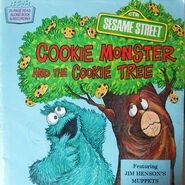 Retrieved from "https://muppet.fandom.com/wiki/Cookie_Monster_and_the_Cookie_Tree?oldid=639663"
Community content is available under CC-BY-SA unless otherwise noted.