Walk-around version of Cookie Monster created for public appearances, including Sesame Street Live and Sesame Place. Cookie Monster first appeared in walk-around form in the Ice Follies in 1974. He made his debut at Sesame Place in 1987, and also appears at the park's Mexican counterpart Parque Plaza Sésamo.

Cookie Monster as he appeared in the Ice Follies. Fabricated by the Muppet Workshop.

Cookie Monster as he appeared in Sesame Street Live and at Sesame Place during the 1980s, fabricated by the Muppet Workshop. Cookie made his debut at Sesame Place in 1987. 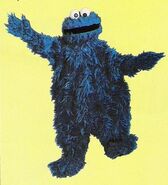 At his Meet & Greet photo op session at SeaWorld Orlando.
Add a photo to this gallery 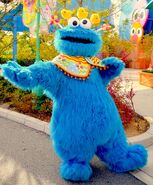 As a reindeer, Christmas at Sesame Place.

Cookie hungry for cake at the Sesame Street Birthday Blowout.

An unknown event at what is now Sesame Workshop, circa early 1980s. Seen with Anna Jane Hays.

A version used for public appearances overseas. His eyes are not googly; instead, they are fixed in place. This version does not have a moving mouth. 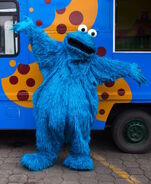 Another walk-around in Mexico used for public appearances.

Sesame Street Circus Spectacular
Add a photo to this gallery
Retrieved from "https://muppet.fandom.com/wiki/Cookie_Monster_walk-arounds?oldid=1250457"
Community content is available under CC-BY-SA unless otherwise noted.