Cory Booker (b. 1969) is an American politician and the United States Senator from New Jersey, in office since 2013. Previously he served as mayor of Newark from 2006 to 2013.

Booker met Elmo at the Peabody Awards luncheon in 2010. Booker stopped by "The Mashable Show" at SXSW in 2017 to take a selfie and chat with Bert about 'freedom.' 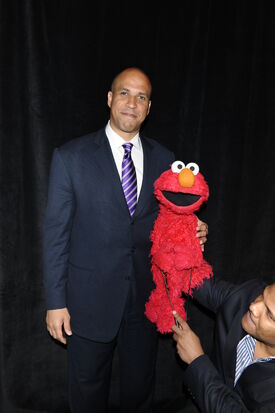 Wikipedia has an article related to:
Cory Booker
Retrieved from "https://muppet.fandom.com/wiki/Cory_Booker?oldid=1193640"
Community content is available under CC-BY-SA unless otherwise noted.