The Count's Mother appeared on Sesame Street a number of times throughout the years, often in flashbacks to the Count's youth.

In Episode 1705, the Count reminisces to the day he counted something for the very first time. His mother counts for his baby self in his crib, which enables him to count "one wonderful mommy." Here, she was performed by Richard Hunt.

Years later, she appeared in Episode 3012 in a flashback to the Count's childhood in Transylvania. She and the other family members all bid farewell as the Count prepares to immigrate to America, but by the time he's counted all their goodbyes, he's become a grown-up. At the end of the episode, she and the rest of the family pay their son a surprise visit on Sesame Street. Kathryn Mullen performed the character for the episode.

She also makes a brief, non-speaking appearance in the song "How Deep is Your Bathtub." Footage was included in a montage as seen in Stars and Street Forever. 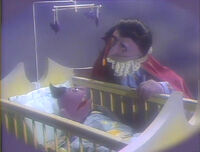 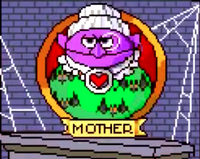 A portrait of the Count's mother hanging in his castle in the Numbers computer game.
Add a photo to this gallery

Retrieved from "https://muppet.fandom.com/wiki/Count_von_Count%27s_Mother?oldid=1258276"
Community content is available under CC-BY-SA unless otherwise noted.