Count Von Count's castle is the home of Count von Count, location of many sketches with the character. A Gothic dwelling with stained glass windows, castle furnishings include the pipe organ and a sumptuous canopy bed, where the Count counts sheep. Other residents include the cat Fatatita and two thousand and twelve bats.[1]

Outdoor views of the castle used in the late 1970s were shot on location at Belvedere Castle in New York City's Central Park.

The Count is seen watching TV at home in the 1985 film Follow That Bird. Sesame Street: 20 and Still Counting has a number of scenes taking place on the balcony of the castle.

In a late 1980s Sesame Street sketch, Susan Sarandon and the Count take shelter in a storm at the front door of an imposing castle. The Count knocks several times, counting the knocks as he goes. When it's clear that nobody will answer, Sarandon urges the Count to stop knocking. The Count says that he knows nobody will answer -- it's his castle. He was just knocking so that he could count the knocks. He then proceeds to count the numerous locks on the door as he lets them in. (First: Episode 2528)

The Count's pipe organ is featured in the "Number of the Day" segments which were a regular part of Sesame Street starting in Season 33 (2002). 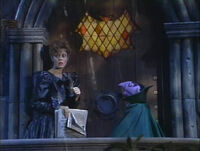 The Count and Susan Sarandon take shelter from a storm at the castle. 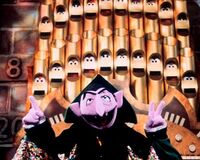 The Count's pipe organ from "The Number of the Day". 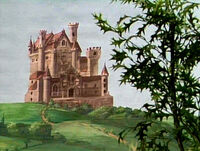 As seen in a later sketch. 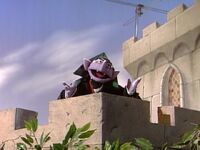 Balcony, and TV antenna, in 20 And Still Counting 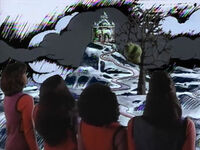 The location was re-visited in the 2017 home video Trick or Treat on Sesame Street, where the castle (now rendered in CGI) is shown to be located in a park in the city. It is also given the house number 456. This version of the castle has been used in a pre-taped segment for the Sesame Street Live show Let's Party!, and the web videos "The Cookie Monster Nosh" and "1, 2, 3 Goodnight." 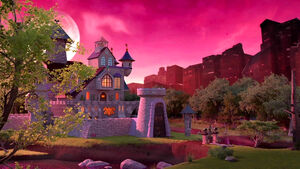 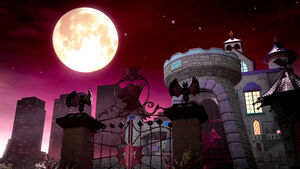 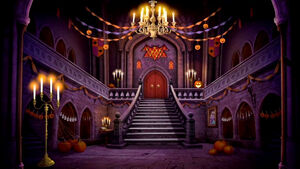 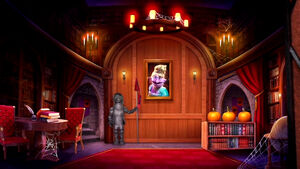 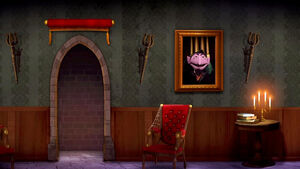 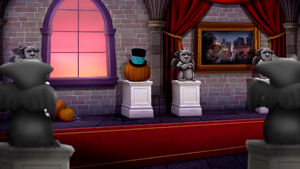 The Count's castle was featured in the computer games Numbers and Search and Learn Adventures, both of which depict it as being adjacent to 123 Sesame Street.

The castle and its garden appear as a level in the video game, Elmo's Number Journey. A section of Elmo's Musical Monsterpiece also takes place there. The castle also is seen in some episodes of Kinect Sesame Street TV, where the Count hosts interactive games.

The Neighborhood Street Party parade at Sesame Place includes a float of the Count's castle.

Castillo del Conde Contar is the centerpiece of Parque Plaza Sésamo, the Mexican version of the Sesame Place theme park. The walk-through attraction is surrounded by a lake and large topiary numbers; visitors can explore the castle and look out at the rest of the theme park. Two rides are connected to the Castle -- Crazy Tower, a thrill ride, and Lago Contar, a water ride that brings visitors into the underground area of the Castle.

The Count's castle is also featured in the Universal Studios Singapore stage show Trick or Treat with Sesame Street.

A CGI rendering of the castle (using the Trick or Treat on Sesame Street design) appears in the PortAventura dark ride Street Mission. Here, the castle grounds are shown to be directly across the way from 123 Sesame Street. 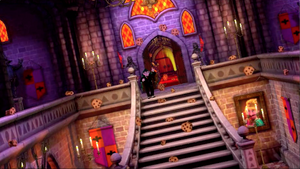 Interior of the castle as seen in Street Mission.