Walk-around version of Count von Count created for public appearances, including Sesame Street Live and Sesame Place. The Count first appeared in walk-around form in the Ice Follies in 1974. He made his debut at Sesame Place in 1992, and also appears at the park's Mexican counterpart Parque Plaza Sésamo.

Outside of Sesame Place, the Count also appears at SeaWorld parks, Beaches Resorts, Busch Gardens, Universal Studios Japan (since 2005), PortAventura (since 2013), Universal Studios Singapore (since 2017), and Selva Mágica. The Count also appeared at the now defunct Tokyo Sesame Place (joined in the late 1990s) and La Feria de Chapultepec. At theme parks, the Count is most prominent during Halloween season; he only appears at PortAventura during that time.

The Count as he appeared in the Ice Follies. This incarnation of the Count is unique in that he sports wings, contributing to the ongoing rumors of the character being a vampire. Fabricated by the Muppet Workshop.

The Count as he appeared in Sesame Street Live and Sesame Place during the 1980s and 1990s, fabricated by the Muppet Workshop. The Count made his debut at Sesame Place in 1992. 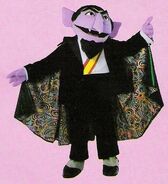 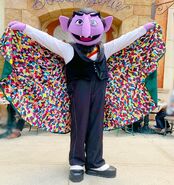 A variant with a rounder head. Designed by Animax. 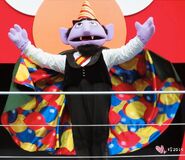 The Count wearing his special party cape at the Sesame Street Birthday Blowout.
Add a photo to this gallery

A version used for public appearances overseas. Does not have a moving mouth.

The Count at Selva Mágica.

La Feria de Chapultepec
Add a photo to this gallery
Retrieved from "https://muppet.fandom.com/wiki/Count_von_Count_walk-arounds?oldid=1239306"
Community content is available under CC-BY-SA unless otherwise noted.