Cowboy X is an animated Sesame Street character appearing in an insert teaching the letter X. (First: Episode 0325) Cowboy X strikes the town of Sniddler's Gulch, stamping Xs on everyone and everything. The townsfolk get fed up and later, politely ask him to stop. He complies and begins stamping Os on everything instead. The townsfolk don't mind now, since (as the narrator describes) they're not too bright anyway.

Several years later, Cowboy X appeared in Anything Muppet form in a season 12 episode. He was made from the Large Lavender Live Hand puppet and performed by Michael Earl. Much like his cartoon form, he's introduced putting Xs all over Sesame Street. He soon learns that X is actually a letter of the "al-fee-bet" and learns more about reading from the street residents. He appeared later that season in Episode 1543. Another Muppet version of the cowboy appeared much later in Episode 2779 (performed here by David Rudman). 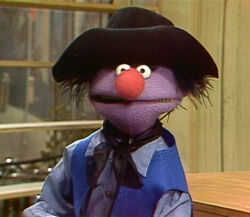 In Anything Muppet form
Community content is available under CC-BY-SA unless otherwise noted.
Advertisement