Kermit the Frog and Pepe the King Prawn were guests on the show on May 12, 2005, while Miss Piggy appeared on the show on August 2, 2007. Oscar the Grouch made a surprise appearance on September 18, 2007, in which he made Ferguson an honorary citizen of Sesame Street, presenting him a certificate drawn by Caroll Spinney.

Fozzie Bear made an uncredited surprise appearance in his show's cold open on June 2, 2009 alongside Denis Leary, and again at the very end, only to be told by Ferguson that his time was up, and that he would have to come back another time. 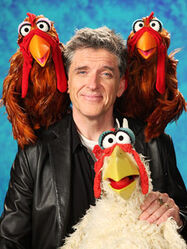 Craig Ferguson with some chickens.
Add a photo to this gallery

Wikipedia has an article related to:
Craig Ferguson
Retrieved from "https://muppet.fandom.com/wiki/Craig_Ferguson?oldid=1070147"
Community content is available under CC-BY-SA unless otherwise noted.