The Crazy Harry Action Figure was released in the second series of The Muppet Show action figures produced by Palisades Toys as part of the show's 25th anniversary marketing campaign. Until the Vinylmation figure released many years later, the figure was the only Crazy Harry toy produced.

Crazy Harry's hands were sculpted with holes in them to hold the plunger or the sticks of dynamite. The plunger had a spring inside. The barrel had a removable lid, and all the explosives could fit inside. 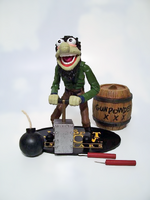 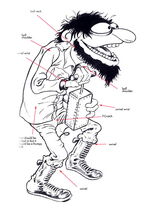 Retrieved from "https://muppet.fandom.com/wiki/Crazy_Harry_Action_Figure?oldid=1381107"
Community content is available under CC-BY-SA unless otherwise noted.