Cristián de la Fuente (b. 1974) is a Chilean actor, perhaps best known to American audiences for being a contestant on season 6 of the Dancing with the Stars. He has appeared on an array of short-lived soap operas in Chile, had a recurring role on CSI:Miami, and was a semi-regular on In Plain Sight.

In April 2010, he filmed a series of PSAs for Chilean television, co-starring with Lola, Abelardo, Gaby and Multimonstruo. Each PSA in the series related directly or indirectly to the 2010 Chile earthquake.

De la Fuente appeared in a photo with Lucero and Kermit the Frog in preparation of the 2011 Latin Grammys. 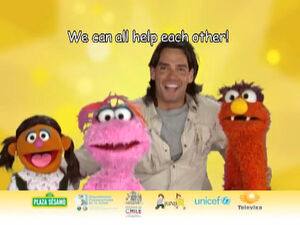 Wikipedia has an article related to:
Cristián de la Fuente
Retrieved from "https://muppet.fandom.com/wiki/Cristi%C3%A1n_de_la_Fuente?oldid=1131607"
Community content is available under CC-BY-SA unless otherwise noted.