The Muppets have borrowed many motifs from vaudeville or burlesque, especially in their earliest variety show appearances. Drag, or female impersonation, was one of these recurring motifs, sometimes deliberately intended as such, or simply recycling a male puppet in a wig or dress for a specific sketch. The practice has its roots in many vaudeville comics who had female characters, as well as the concept of the pantomime dame (where matrons or ugly stepsisters in stage fairy tales were always men in drag).

Kermit the Frog in particular, in his earliest years, often donned a wig to lip synch to female vocalists such as Keely Smith or Rosemary Clooney. In an early appearance on The Today Show, the host complimented Jane Henson, performing the character opposite Jim Henson's Sam, on the "feminine" quality she brought to the character (though Jane tried to stress that the puppet was named Kermit, and normally male). In particular, the many Muppet Monsters have appeared incongruously as females, with their heavy brows, teeth, and generally fearsome features contrasting with feminine hair or attire; a typical example is Beautiful Day Monster, in a wig and bow, playing Lulu in the Sesame Street skit "Lulu's Back in Town."

On still other occasions, instead of a drag performance, a puppet is refurbished or recycled as a differently gendered character, a practice done with both male and female Muppets.

- A "Near and Far" segment on Sesame Street.
- as "Little Red Cookie Hood" in multiple skits
- in Cindrella's dress in Episode 4061
- playing dress up in the book When Is Saturday

- singing I've Grown Accustomed to Your Face in early appearances
- singing in the Old Black Magic episode of Sam and Friends
- on an episode of What's My Line?
- dresses as "Ms. Mask", a lady wrestler in Episode 202 of The Muppet Show

- in Episode 109 of The Muppet Show,
- in the skits "Lulu's Back in Town" and "Everyone Knows It's Windy" on Sesame Street
- in Herb Alpert & the Tijuana Brass

- Telly dresses in his duck costume from Peter and the Wolf in order to play "mother" for a baby duckling he cares for in Episode 4051.

- as one of the Sinclair Sisters in episode 220 of Dinosaurs.
- as Earletta in the Dinosaurs episode, "A Working Girl." 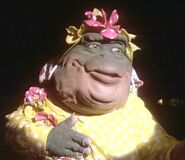 Earl Sinclair as one of the Sinclair Sisters 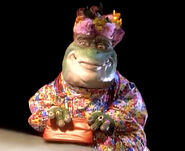 Ernie as the Queen 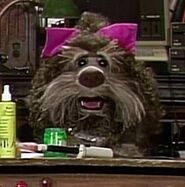 Sprocket dressed as a poodle

Wontkins as Sleeping Beauty
Add a photo to this gallery

Retrieved from "https://muppet.fandom.com/wiki/Cross-dressing_characters?oldid=320341"
Community content is available under CC-BY-SA unless otherwise noted.