Cupid, the Roman god of love, is traditionally depicted as a winged child whose magic arrows cause their targets to fall in love with the next person that they gaze upon. In Greek Mythology, he is known as Eros.

In episode 105 of Muppets Tonight, Cupid shoots Bobo with his magic arrow (he needs a crossbow; Bobo is a bear after all) and makes him fall in love with Cindy Crawford. Later, he accidentally shoots Sal Minella, who falls in love with Johnny Fiama.

When Cupid hits someone with his arrow, little Heart-Shaped Butterflies appear and sing "I Wanna Be Loved By You." In order to reverse the effects of his spell, however, he needs to drop something heavy on the victim's head.

Ernie as Cupid in The Sesame Street Postcard Book 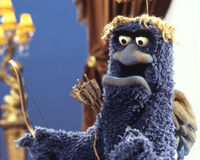 Beautiful Day Monster in a deleted scene from The Muppet Show 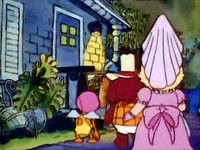 Baby Animal in "Who's Afraid of the Big, Bad Dark?" 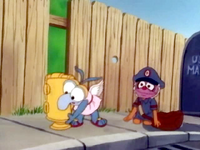 Baby Gonzo in "My Muppet Valentine" 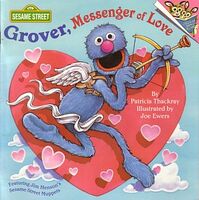 Wikipedia has an article related to:
Cupid
Community content is available under CC-BY-SA unless otherwise noted.
Advertisement