D23: The Official Disney Fan Club is the official fan club for The Walt Disney Company. Founded in 2009, the organization is known mainly for its biennial exposition event, known as the D23 Expo. The name D23 refers to D for Disney and 23 for 1923—the year Walt Disney founded the company.

On February 16, 2021 (the 25th anniversary of the theatrical release of Muppet Treasure Island), D23 hosted an online look back at the film with Brian Henson, Dave Goelz, Bill Barretta, and Kevin Bishop (YouTube) and a live-tweet of the film with Kermit the Frog, Gonzo the Great, Rizzo the Rat, and Miss Piggy.

On October 7, 2021, Gonzo and Pepe the King Prawn appeared on the D23 Inside Disney podcast to promote Muppets Haunted Mansion.[5]

On November 21, 2021, D23 hosted an all-day "Destination D23 LIVE!" event. Kermit the Frog appeared during the Disney+ presentation, discussing the Muppet content that can be found there and presenting a blooper reel from Muppets Haunted Mansion. 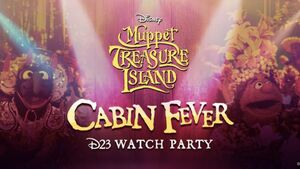 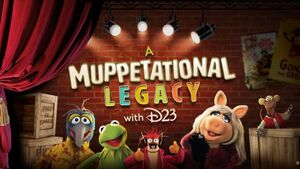 Wikipedia has an article related to:
D23 (Disney)
Community content is available under CC-BY-SA unless otherwise noted.
Advertisement