DJ 1 is a panda who serves as one of the three Muppet DJs on Animal Jam. Along with DJ 2 and DJ 3, he runs the sound, video, and lighting equipment for the show.

DJ 1 has a deep, bassy voice, and often sings the songs during Bozark's dance numbers.

In 2010, DJ 1 appeared in a short called Copy Security that was released on The Jim Henson Company Podcast. In this short the puppet was performed by Alison Mork. In a reference to being a puppet, he presses an X-Ray button on a copy machine and is shocked to see a hand inside of him. He also was puppeteered by Grant Baciocco in a puppet lesson in another 2010 podcast. 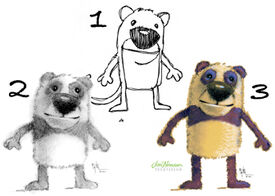 Add a photo to this gallery
Retrieved from "https://muppet.fandom.com/wiki/DJ_1?oldid=1247729"
Community content is available under CC-BY-SA unless otherwise noted.