Dan Rather (b. 1931) was the long-time anchor for CBS Evening News, from 1981 until 2005. That year, while accepting the Peabody award for his work on 60 Minutes II: Abuse at Abu Ghraib, Rather received a kiss from Kami, the star of Takalani Sesame.

Rather was spoofed in Sesame Street’s Season 38th season as Dan Rather-not, a Grouch reporter.

Abby Cadabby, Rosita and Telly Monster met Rather when they visited the SiriusXM Satellite Radio studios on January 10, 2017. 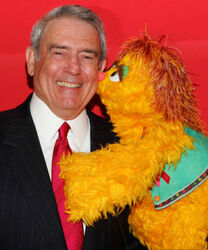 Rather with Kami
Add a photo to this gallery
Wikipedia has an article related to:
Dan Rather
Retrieved from "https://muppet.fandom.com/wiki/Dan_Rather?oldid=1070197"
Community content is available under CC-BY-SA unless otherwise noted.