Dance Myself to Sleep

In the song "Dance Myself to Sleep," Ernie explains that when he can't fall asleep, he gets back up out of bed and dances until he feels sleepy. He's joined in his dancing by some Boogie Woogie Sheep, a bugle, and his Rubber Duckie. Throughout the number Bert complains and tells Ernie to go back to bed. At the end of the song, the sheep take Bert and his bed outside, and Ernie snuggles down into his bed with his Rubber Duckie, finally able to go to sleep.

Ernie (voiced by Steve Whitmire) recorded a new version of the song for the CD-ROM game, Music Maker, with commentary by Bert.

In The Street We Live On, the song was re-edited to include celebrities who had appeared on the show for Season 35, including Joshua Bell, Harvey Fierstein, Whoopi Goldberg, Seth Green, Norah Jones, Larry King, Andrea Martin, Martina McBride, Dr. Phil McGraw, Christopher Meloni, Julianne Moore, Natalie Portman, Doris Roberts, Ruben Studdard, and Venus Williams. Stockard Channing, Allison Janney, and Lily Tomlin were also included in their characters dancing on the set of The West Wing during the filming of the episode, "Eppur Si Muove," where the Sesame Street Characters made an appearance. When this special was released on video, Ruben Studdard and Whoopi Goldberg were edited out and replaced by Gloria Estefan taken from the introduction of "You Say Hola and I Say Hola."

In episode 4276, Ernie and Bert sleep over at Gordon and Susan's while their apartment is flooded. To help get to sleep, Ernie whips out his cellphone and calls the Boogie Woogie Sheep to dance for him. 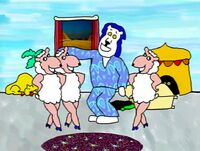 An animated segment sung by a lion, drawn by Sally Cruikshank.
(First: Episode 3848) 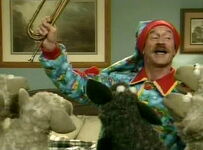 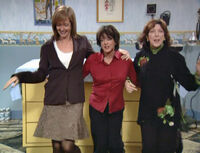 A celebrity version was filmed for The Street We Live On.