Dances with Wolves was a 1990 film based on a book of the same name. They both tell the story of a Civil War-era United States Army lieutenant who travels to the American frontier to find a military post and eventually befriends a local Sioux tribe. The movie won seven Academy Awards. 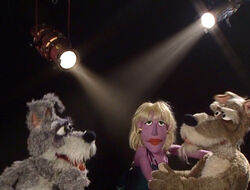 Wikipedia has an article related to:
Dances with Wolves
Retrieved from "https://muppet.fandom.com/wiki/Dances_with_Wolves?oldid=1194416"
Community content is available under CC-BY-SA unless otherwise noted.