Danny John-Jules (b. 1960) is a British actor, dancer, and singer best known for playing "the Cat" on the television series Red Dwarf. Spitting Image voice actor Chris Barrie was also actively involved on that show as "Arnold Rimmer" another main character.

He appeared, unbilled, in The Great Muppet Caper as a dancer, and supplied the voices of Fireys #3 and #4 in Labyrinth. He also appeared in Frank Oz's Little Shop of Horrors as a doo-wop singer. 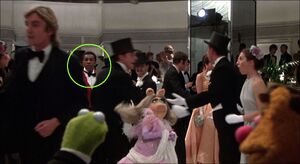 John-Jules in The Great Muppet Caper

Wikipedia has an article related to:
Danny John-Jules
Community content is available under CC-BY-SA unless otherwise noted.
Advertisement