Dave Grohl (b. 1969) is an American musician best known for his work with the bands Foo Fighters and Nirvana. He has also sporadically worked with Nine Inch Nails, Tenacious D, and Queens of the Stone Age. As part of Nirvana, Grohl co-wrote the song "Smells Like Teen Spirit" along with Kurt Cobain and Krist Novoselic.

Grohl makes a cameo in the 2011 film The Muppets as the Animal replacement in the cover band The Moopets. In 2015, he appeared in The Muppets episode "Going, Going, Gonzo" wherein he challenges Animal to a drum-off.

Grohl appeared as a guest star for Sesame Street’s 50th season, singing "Here We Go" with Big Bird and Elmo. 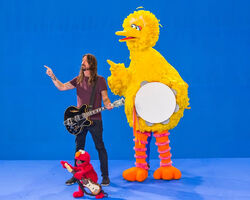 Wikipedia has an article related to:
Dave Grohl
Retrieved from "https://muppet.fandom.com/wiki/Dave_Grohl?oldid=1228129"
Community content is available under CC-BY-SA unless otherwise noted.