David appeared on Sesame Street from season 2 until season 20.

The second adult African-American male resident (after Gordon), David is a hip, upbeat individual who's fond of eccentric hats and singing. He initially worked part-time at Hooper's Store while studying law, and lived in an apartment across the street from 123 Sesame Street (he has a view of Oscar's trash can as seen in Episode 1779).

For several years, he and Maria had a romantic relationship. However, in later seasons, Maria fell in love with, and eventually married, Luis.

Following Mr. Hooper's death in 1983, David inherited Hooper's Store and operated it with help from Piri and later Gina. David's family includes his sassy grandmother Harriet, who visited periodically, and his niece Akim, who assisted him in the store from time to time. In Episode 0889, it's mentioned that he also has a brother named Gregory.

In Episode 2256 of Sesame Street, Elmo acquires a new doll and names it David. The human David is touched by the gesture, until he learns that Elmo intends for him to change his own name.

When Northern Calloway left the show in 1989, it was explained that David had moved away from Sesame Street to live on his grandmother's farm, and ownership of the store was turned over to Mr. Handford.[1] 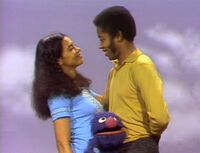 David and Maria share an intimate moment, despite Grover's presence.
Add a photo to this gallery

Retrieved from "https://muppet.fandom.com/wiki/David?oldid=1368107"
Community content is available under CC-BY-SA unless otherwise noted.