David Arquette (b. 1971) played Dr. Tucker in Muppets from Space and Daniel in It's a Very Merry Muppet Christmas Movie.

Arquette is one of only five actors to appear on-camera in two feature-length Muppet movies; the others are Jeffrey Tambor, Elliott Gould, Whoopi Goldberg and bit player Dan Payne.

In 2002, he appeared at the unveiling of Kermit the Frog's star on The Hollywood Walk of Fame in a green suit. 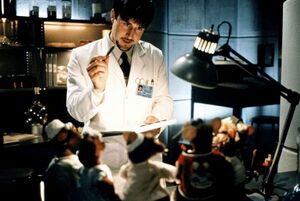 Arquette as Dr. Tucker with Rizzo and his fellow rats
Add a photo to this gallery

Wikipedia has an article related to:
David Arquette
Retrieved from "https://muppet.fandom.com/wiki/David_Arquette?oldid=1070284"
Community content is available under CC-BY-SA unless otherwise noted.