Smyrl began his career as a coffeehouse poet in the 1960s, and appeared in the Broadway musical Working (1978). In 1980, relocating to California, Smyrl became a staff writer on the sitcom Benson. He subsequently worked on The Cosby Show as a gag writer, audience warm-up man, and recurring guest performer, appearing in five episodes, notably as contractor Sam Lucas. Film credits include a small role in The Preacher's Wife, and on television, Smyrl appeared twice in Law & Order. An active voice-over performer, Smyrl was heard in many national commercials, in addition to narrating Ralph Bakshi's two Malcolm and Melvin shorts for Cartoon Network and voicing Henry Radiman in the online animated series Anarchy. 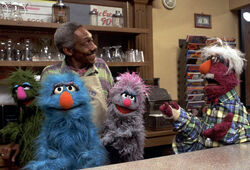 Smyrl as Mr. Handford with Hooper's Store patrons in January 1993
Add a photo to this gallery

Retrieved from "https://muppet.fandom.com/wiki/David_L._Smyrl?oldid=1155516"
Community content is available under CC-BY-SA unless otherwise noted.